Proton therapy is a form of radiotherapy that irradiates tumours in a highly targeted manner, protecting healthy tissue even better than current radiotherapy techniques.

The proposal for proton therapy treatment at the François Baclesse Centre is a care offering on a national scale. It will be the third site in France where this therapeutic treatment will be proposed after the Centre d’Orsay (Paris region) and Nice.
For more than a century, radiotherapy has been an essential treatment for cancer. Radiotherapy involves sending targeted radiation to the tumour, aiming to destroy the affected cells while preserving the surrounding healthy tissues.
Conventional radiotherapy uses photon or electron beams. Proton therapy uses proton beams.
The difference between proton therapy and conventional radiotherapy is based on the energy deposition method of the beam used. The energy deposition of the proton beam makes it possible to treat the tumour without irradiating beyond this zone. 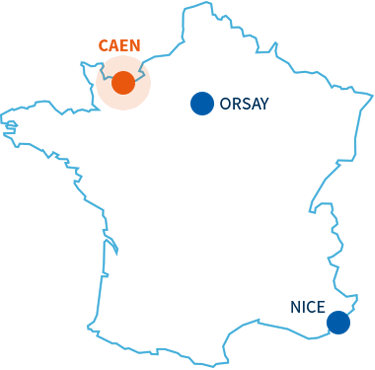 During radiotherapy treatment, healthy tissues in the vicinity of the tumour (critical organs) receive a non-negligible dose that may lead to side effects.

The physical qualities of protons allow them to deliver their dose to the tumour without irradiating beyond it. Proton therapy therefore makes it possible to greatly reduce the dose of radiation to healthy tissues. This leads to reduced toxicity compared to the particles used in conventional radiotherapy.

Proton therapy can reduce short- and long-term side effects and reduce the likelihood of treatment-related secondary tumours.

Proton therapy is used to treat cancer in patients for whom the need for irradiation accuracy is even greater than for conventional radiotherapy, such as children with cancer, but also adults with cancer located near critical organs, sensitive to radiation, and when conventional methods become too toxic and/or inefficient.

But it is not suitable in all cases. Your treatment team will choose the best radiotherapy technique for you.

Which pathologies should it be used for?

For adults, proton therapy is currently indicated in tumours where the ballistic and radiobiological imperatives are high. Some indications are now consensual and have been validated by the French health authorities. These include chondrosarcomas and chordomas of the base of the skull and spine, paraspinal sarcomas and ocular melanomas. Some so-called “radioresistant” tumours of the base of the skull and some meningiomas are also recognized as indications for proton therapy.

The value of proton therapy for the treatment of solid tumours in children lies mainly in the preservation of healthy tissues. By limiting short- and long-term side effects, this property of proton therapy significantly reduces the likelihood of impact on patient development and growth.

Tumours in children or adolescents and young adults, for which it is important to limit the dispersion of low doses of radiation and the total dose of radiation, are therefore a key indicator. In these patients, the value may also lie in the preservation of neurocognitive, endocrine and cardiac functions and the prevention of any other long-term toxicity. Because of its ballistic qualities, proton therapy exposes children to a much lower dose close to, and remote from the tumour than conventional X-ray radiotherapy.

So-called “radioresistant” tumours are also indications for proton therapy because they require the use of high doses of radiation to control the tumour, especially if they are close to organs whose tolerance is a limiting factor, such as the optic nerves, the chiasma , the medullary cord, the bulbar region and the brainstem. Some sinus tumours are considered to belong to this category because of the possibility of a relative dose escalation with proton therapy, the value of which has been confirmed.

Indications are discussed on a case-by-case basis, based on a complete medical file and comparative dosimetry. The decision is validated in a specialized Multidisciplinary Consultation Meeting (MCM).

Learn more about the cancers treated

Proton therapy is an innovative technique to limit the toxicity and improve the effectiveness of certain photon radiation treatments. However, the new indications for proton therapy need to be assessed because of its cost and the steady progress of treatment using conventional radiotherapy. Patients for whom the evidence levels of the indications need to be strengthened are offered the opportunity to take part in clinical research trials.

The François Baclesse Centre uses Proteus One proton therapy equipment (by IBA) which has a mobile gantry system with pencilbeam scanning (PBS), allowing conformational treatment with 3D modulation of the dose delivered.

Pencilbeam scanning makes it possible to administer a millimetre proton beam within the target tumour volume. By controlling this beam layer by layer, and pixel by pixel, PBS controls the spatial distribution of the dose to adapt it to the shape of the tumour, while safeguarding healthy tissues. 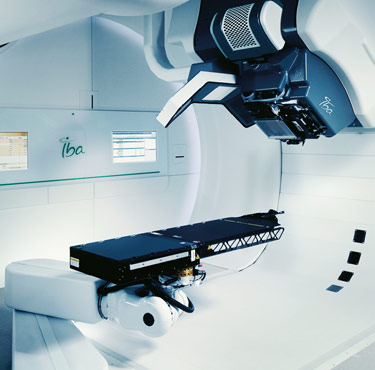 Once the indication has been validated during a Multidisciplinary Consultation Meeting (MCM), the proton therapy treatment course includes a treatment preparation phase and a series of irradiation sessions.

A radiotherapist from the Centre, the patient’s referent, provides medical follow-up of the treatment.

For more information about an application for care, staying in the centre or treatment:

Contact the radiotherapy department
Practical information
Proton therapy care requires coordination between the Centre's medical teams and the doctor(s) who have requested this care and the organization of accommodation and transportation.

Learn more
Treatment for adults
Once the indication has been validated during a Multidisciplinary Consultation Meeting (MCM), the proton therapy treatment course includes a treatment preparation phase and a series of irradiation sessions.
Learn more